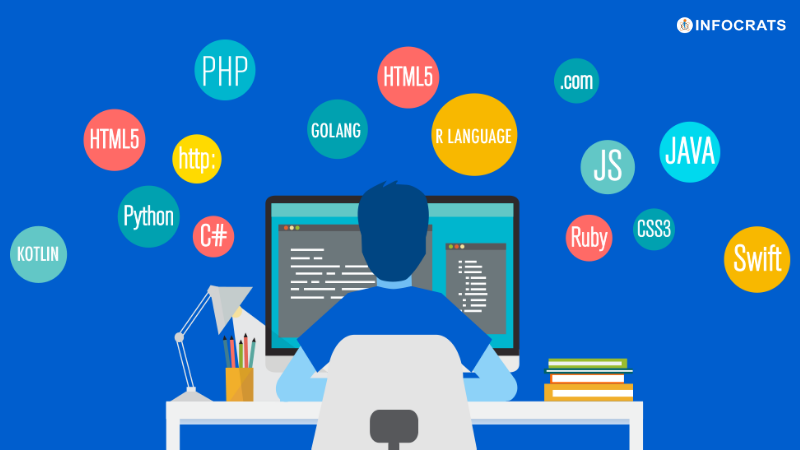 It has been proven time and again that custom web development in India is a field that is so evergreen that opportunities here are always more than enough for everyone. Web development is something that emerged in the early 90s and shook the development industry with its evolution while driving in diverse ways as well as domains. In the 21st century, it is still one of the most sought-after skills. If you are someone who is looking at a career working with a web development company then mastering web development languages is extremely essential.

The best way to understand programming languages is a simple definition that states that these are computer languages used by programmers or developers in order to communicate with computers. Simply put, programming languages are a set of instructions that are written in any specific language be it C, C++, Python, Java that helps you perform a specific task.

So, if you are looking to provide web development services in Indore or elsewhere then the information regarding programming languages that will be dominating the year 2022 might come in handy.

Here’s a list of the top five programming languages from which you can choose the one that you like and that meets your requirement. We have also stated the reasons why these languages make it to the top of our list. Have a look:

1. JavaScript: The very ruler of web development has undoubtedly been Javascript. Being the most popular language among web developers, this one is the only language that allows people to create both backends as well as front-end web applications and mobile applications too.

Looking at the 2016 Stack Overflow Developer Survey, we can conclude that JavaScript is genuinely the most commonly used programming language on planet earth. (Source)

One of the major attractions of the JavaScript programming language is not only that it can run on a browser and server using node JS but it is also the incredible frameworks as well as libraries that it has available for the process of web development as well as app development.

2. TypeScript: The reason why people call Typescript the superset of JavaScript is because it contains almost the same kind of applications as JavaScript does. A great dynamic web development company can tell you that Typescript is mainly a language that has been made for development. This means that it does not come along with a lot of appeal to the scientific community out there.

Nevertheless, Typescript has been stated as the second most popular language if you look at the list of most loved languages curated by StackFlow. When comparing Typescript to JavaScript all you need to know is that the former has simplified many difficult-to-understand behaviors that the latter had. Simply put, Typescript is easier to use for up-and-coming developers with a lower skill set of using JavaScript.

3. Python: In recent times people have noticed that this was another one of those languages that gained a lot of popularity very quickly. People know that Python is not exactly a new language and has survived quite well. It is popularly stated as the most versatile programming language today. The providers of web development services in Indore use Python for various processes like data science, scripting, web development as well as automation.

Just like JavaScript, the community users express a lot of support towards Python since it has many useful frameworks, libraries as well as tools that help developers create a web application very quickly and effortlessly.

According to Python statistics in the year 2020, it was revealed that there are around 8.2 million developers of Python in the world. On top of this, it was observed that in September 2019 there were 7 million Python developers and  7.1 million Java developers in the entire world at the time.

4. PHP: For many developers, PHP has been a big blessing. Created many many years ago this may just be one of the best programming languages for web development in the year 2022. The benefits that PHP bags with itself include its dynamic nature and the fact that it is a server-side scripting language.

If such benefits are not enough to incline you towards thinking well about PHP, recall how half of the internet is genuinely running on this programming language including one of the most popular web application software called WordPress.

5. C++: Now, don’t fall off your chair yet. We know that it might come as a shock to you that we have included this programming language in a blog that states the top-five programming languages in 2022. C++ is a language known for being used to learn basic concepts of data structures as well as algorithms. People have always believed that this language has very little use in the practical world.

languages. This makes it very easy to learn and even master. So, while we are fully aware that it will not dominate the year 2022 it will still have a great shot and is one of the most popularly used languages for learning in this year as well as it has been for so many years in the past.

Article Name
Top Programming Languages in 2022 for Web Development
Description
If you are looking to provide web development services in Indore or elsewhere then the information regarding programming languages that will be dominating the year 2022 might come in handy.
Author
Rakesh Jain
Publisher Name
Infocrats
Publisher Logo